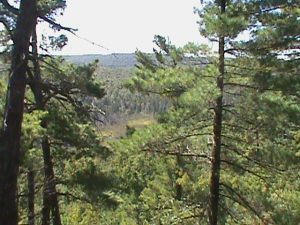 By Gabriel Caplet of Headwaters News

Once again, the Army Corps of Engineers has objected to Kennecott’s planned ore hauling road, in Marquette County. The road project, formerly called “Woodland Road,” but now going by “County Road 595” and applied for by the county road commission, “is deficient in several areas,” according to a letter dated March 29, sent from the Corps’ Detroit office to the Environmental Protection Agency.

The letter makes clear that the “the primary beneficiary of the route as proposed would be Kennecott.” According to the Corps, 595 “is the most direct route from the Eagle Mine to Kennecott’s ore processing facility,” in Humboldt Township, so the road plan should be clear it would be built largely to service Kennecott’s mining operations.

In the letter, the Corps lists a number of other potential hauling routes that would be preferable to constructing 595, including rail options, something not considered in the application. Rehabilitating abandoned railways, the Corps writes, “in combination with selected road improvements and active railroad lines, may provide a potentially viable alternative for transportation of ore and timber, as well as improve road access from US-41 to the northern portion of Marquette County.”

At a meeting Tuesday, county commissioner Mike Quayle supported having Kennecott haul ore using a rail system, instead of constructing 595.

“The rail option is what Kennecott first applied for and, after the purchase of the Humboldt mill, changed their plan and wanted first to build the Woodland Road, abandoned that plan. . . as it appeared they would run into too much resistance from regulatory agencies,” said Quayle. ”Kennecott and local politicians came up with a proposal for the road commission to apply for virtually the same road, only changing the name to County Road 595.”

“Sixty percent of Marquette County roads and bridges are in need of repair and we have little or no money to do so. The road commission should worry about the. . . roads and bridges needed to be repaired rather than applying for a new 22 mile road that is virtually a mine hauling road and will add more costs to the. . . operating budget.”

“Rail transportation, in my opinion, should be the first consideration to avoid safety issues now coming to the foreground and will help save the current road systems which we all know this type of hauling is very hard on,” Quayle said at the January 2011 meeting.

Kennecott’s originally submitted hauling plan involved trucking ore from the Eagle Mine to a railhead north of Marquette, then using rail to transport ore for processing.

In addition to rail possibilities, the Army Corps’ letter noted Kennecott’s currently approved hauling route (Big Bay to Marquette, using County Road 550) would look more feasible if the applicant considered constructing a bypass of the city of Marquette, through Marquette Township, another possible route not considered in the 595 plan. The township’s master plan already demonstrates a need for this specific road, which would divert heavy truck traffic from more populated urban areas.

According to the Corps a number of arguments in support of 595, including job creation, public safety, and recreational can’t be supported. The letter states, “Construction jobs would be created by any of the alternative routes, either through upgrades or new construction.” Additionally, while 595 would change the type of recreation in the area to one more focused on urban motor vehicle access, claims 595 would improve the recreational experience are “based on personal taste.”

A key argument used by county officials in support of the 595 plan – public safety – was refuted in the Corps’ letter. According to the letter, Kennecott is listed in the application as the primary user of emergency services in the area. By upgrading the Triple A road, the company’s own emergency personnel, as well as emergency services in nearby Big Bay, would have more efficient access to the region.

Despite statements that 595 has been needed by the county for years, the Corps found no evidence that the county has shown a need for a new road west of the Dead River Dam system prior to working with Kennecott on the project. The claimed need for a road west of the dams is heavily emphasized throughout the application, with an entire appendix of news articles focused on the 2003 flood of the Dead River. Yet, even during that catastrophic flood emergency personnel were able to reach the northwestern part of the county using an old bridge. Since 2010 that bridge has been replaced with one tall enough to withstand a complete failure of the dam system. This new bridge was not mentioned in the 595 application.

The Corps reiterated a concern the agency expressed about Kennecott’s original Woodland Road plan, in 2010, that construction of 595 could lead to additional mining and logging in the area. The 595 application states that without the new road the “full economic benefits” to the logging and mining industries “cannot be realized.” The Corps writes that the haul road plan must consider these foreseeable industrial activities as potential impacts if 595 were built.

The letter also stated that 595 would cause too great of harm to wetlands, wildlife, and rare and sensitive plants.

Following the Corps’ letter, the county road commission can now change its application to conform with federal legal requirements. That, combined with existing political pressure to build the haul road, may be the county’s only option now if it wants to get 595 approved and built for Kennecott.

To date the county has spent over $50,000 attempting to obtain permits for Kennecott’s road, in addition to securing state funding to use public revenue to fund portions of the hauling route not covered in the application, including a multi-million dollar road leading into the company’s processing facility. According to the road commission, if 595 is ultimately approved, public funding would also likely be used to upgrade a portion of the Triple A road connecting the Eagle Mine with 595.