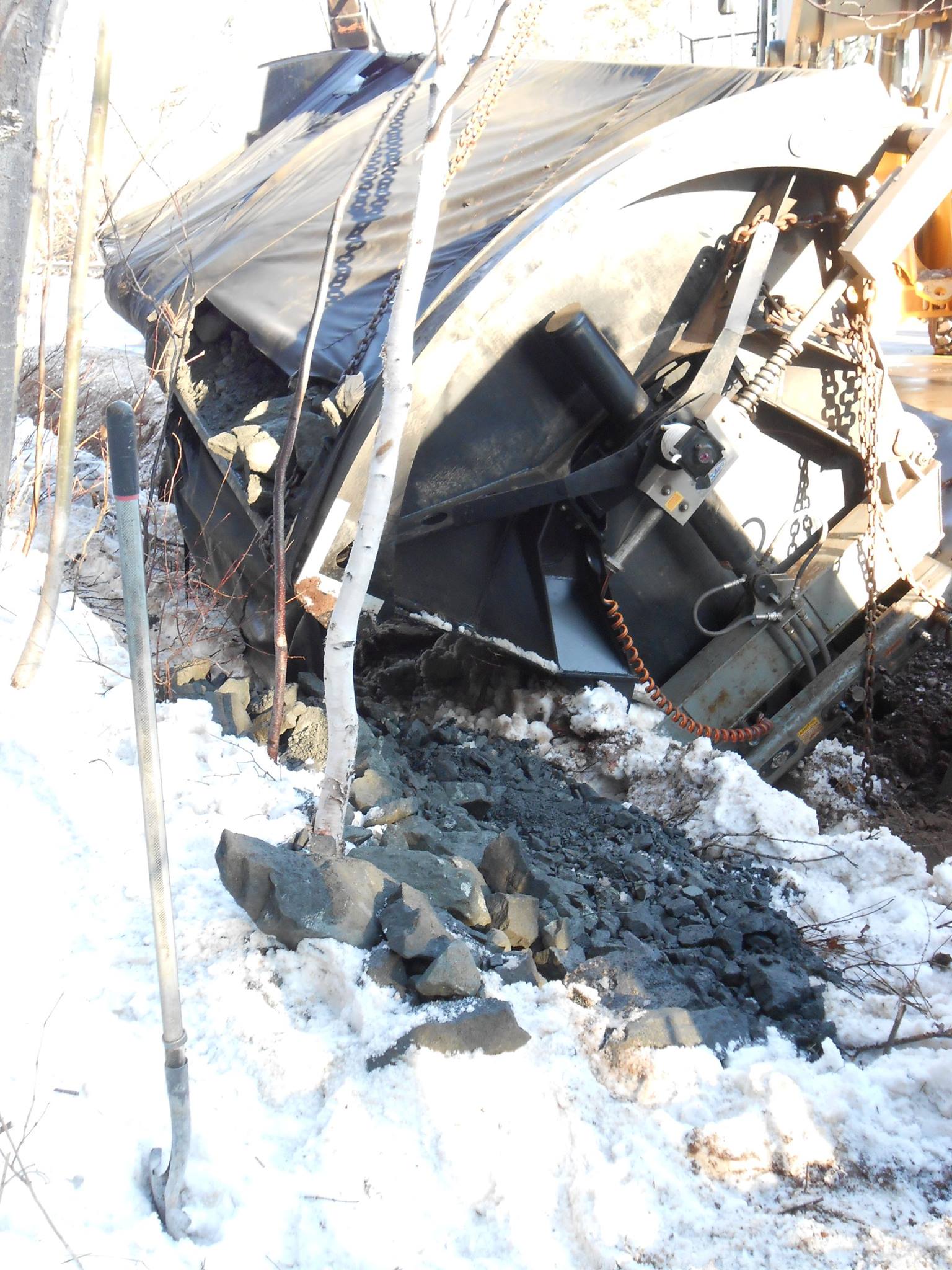 Marquette, MI – In the early morning hours of Saturday December 13, 2014 a truck hauling nickel and copper ore from Eagle Mine facility on the Yellow Dog Plains left the roadway and overturned in a ditch. Thankfully, no one was injured, no other vehicles were involved in the accident, and Marquette area emergency response teams were quick to arrive on the scene. The truck was owned by MJ Van Damme Trucking but operating for Lundin Mining Company under contract.

Ore was spilled in the accident despite the initial claim made by the company that there was no leakage. The company later corrected the statement after photos were taken by YDWP that revealed ore had been spilled. According to the police report in The Mining Journal, this accident involved an evasive maneuver to avoid a deer and the operator was cited for driving over the speed limit. It took over 26 hours for the truck to be righted after leaving the road. Meanwhile, Big Bay citizens heading to Marquette were being turned around once they reached the site of the accident causing multiple hours of traffic delays.

Transportation accidents are inevitable, and the chance an accident will occur is high. Nine trucks are currently delivering 40 loads of ore per day (one load per truck) on a 24/7 basis on County Roads AAA, 510 and 550. By law, Eagle Mine should be operating according to a comprehensive transportation contingency plan that includes contingencies for emergency situations such as this. The complete contingency plan would address this scenario and other inevitable outcomes. It is required by the Michigan Non-ferrous Mining Law Part 632 and has not been enforced.

According to attorney Michelle Halley, “This accident demonstrates why it is important for the State of Michigan to require Lundin to assess the environmental impacts of all mining activities including hauling ore on the designated transportation route. That analysis is required under Part 632, but to this day the State has failed to apply or enforce it.”

In the current Eagle Mine Permit Application, sections 4.3.7, and 8.1.1.3 cover the subject of ore transportation in a few broad paragraphs without providing much detail. The company states in this section that spills would be relatively easy to clean up and the speed of clean up would reduce the chance for Acid Rock Drainage. This situation highlights the need for a better plan, since the clean-up was neither easy nor fast. This topic has been brought up in court by co-petitioners in a case against the mining permit, which include: Yellow Dog Watershed Preserve, Keweenaw Bay Indian Community, National Wildlife Federation and the Huron Mountain Club.

County Road 595, had it been built, certainly would not make ore transportation any safer. Accidents related to wildlife and speed would still occur, and the remote location of the road would have made emergency response times much longer.

In light of recent events, we urge Lundin Mining Company improve their contingency plan to best serve the local community.