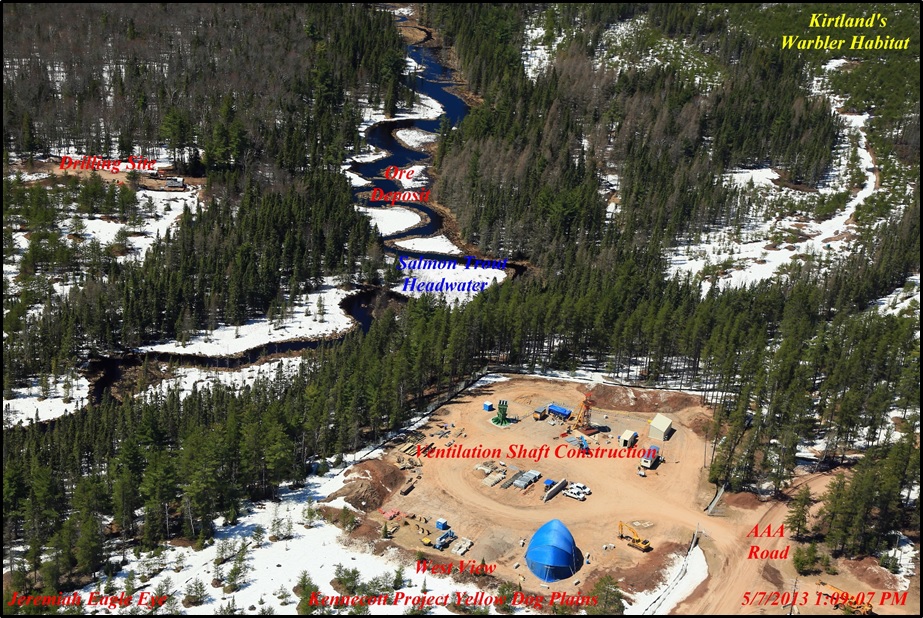 Last Friday, June 28, 2013, the DEQ announced their decision to approve a new Air Quality Permit for modifications to Eagle Mine. The modifications include: constructing the single Main Ventilation Air Raise (MVAR) without a bag house fabric filter dust collector, moving the ore-crusher from the mine to the mill in Humboldt, and adding an enclosed aggregate storage building.  A public comment hearing for the permit was held on March 12 and written comments were accepted for a 30-day period. At that hearing there was strong public opposition to the changes stated in the new permit with about 60 people present. Yellow Dog Watershed Preserve questions the rationale for removing the filter dust collector when Rio Tinto agreed to install a fabric filter as a result of comments received during the public comment period for the original permit. At the hearing in March, Emily Whittaker said, “There is no real need to remove the bag house other than to save money and they have the money to do it,”[…] “The bag house was a stipulation of receiving the air permit in the first place so we again urge [the DEQ] to keep them on their word.”

According to the new permit, all emissions produced by underground activities will be vented through the MVAR. Components of mine exhaust are mine heater combustion products and particulate generated by vehicle travel; drilling; blasting; underground ore and development rock handling; and backfill material handling. Emissions will instead be controlled underground with water sprays. The effectiveness of such emission controls was in question by the public at the March 12 hearing with limited answers. Yellow Dog Watershed Preserve is concerned about the water spray dust control measures. Furthermore, a visible exhaust plume was observed venting from the MVAR prior to the issuance of the new permit last week. The Yellow Dog Watershed Preserve and Concerned Citizens of Big Bay sent questions to the DEQ and Eagle Mine engineers asking about the visible emissions. The DEQ and Eagle Mine has responded to our concerns stating that the visible exhaust was a water vapor plume which is due to the humid environment underground venting to the atmosphere. Yellow Dog Watershed Preserve is requesting an analysis of the plume for the presence of contaminants. At the moment, no chemical analysis of the plume has been offered.

In other recent events, on June 13th Lundin Mining Company purchased the Eagle Mine which includes its permits, workers, contracts, community commitments, assets, and (some but not all) of Rio Tinto’s land. The purchase includes the funding contract for the Community Environmental Monitoring Program (CEMP), the upgrades to existing roads, and the community fund with Cliffs. County Road 550 is currently undergoing resurfacing and mining is expected to begin in November 2014. Yellow Dog Watershed Preserve will continue to investigate the implications of the sale.