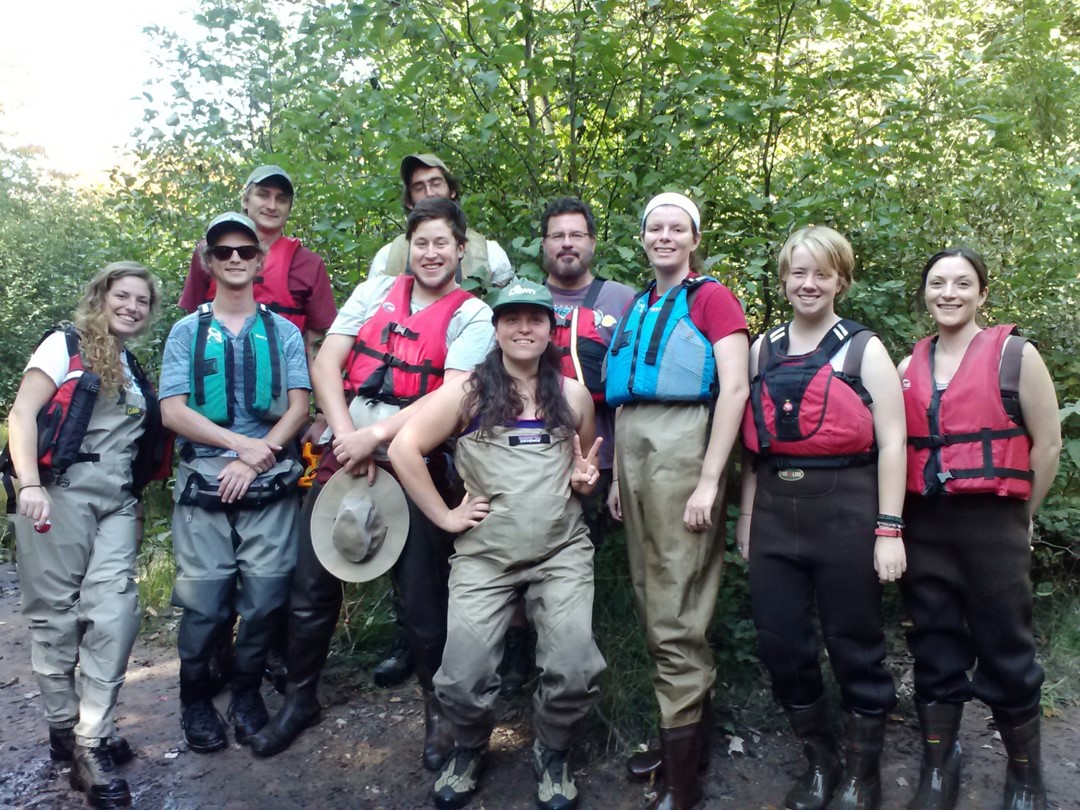 As I waded into the Yellow Dog River in chest waders in mid-fall, the rain rolled off my waterproof jacket sleeves. The cold drizzle made my lips shiver and my hands slip on the bucket full of river water, leaves, and twigs I was collecting for the Yellow Dog Watershed Preserve’s volunteer stream monitoring program. At the bottom of the bucket, out of what looked like just a clump of mud, a monstrous dragonfly nymph emerged, legs clawing the air. I gave him an extra inch of fresh water, and promised that he would be returned to his riverbed before too long. I let the bucket float on the surface for a short time to rest my arms and looked up to watch a tall aspen caught in a gust of wind that sent golden-yellow leaves fluttering to the water below. Standing there in a strong current, shivering under my layers upon layers of clothing, I felt more at peace than I had in months.

I am almost certain that everyone must remember the first time they set eyes on the Yellow Dog’s home. My first time was through a dusty windshield, following a troupe of YDWP volunteers out to a site on the river to learn how to conduct a stream monitoring session. This was May 2014, when construction crews were expanding the old County Road 510 to prepare for a two-lane paved road leading to the Eagle Mine. On that first day, the dust clouds were making it nearly impossible to see. I slowed my car to a crawl, and tried to imagine what it would have looked like months earlier, when the trees weren’t cut back and the roadside wasn’t lined with sandy banks and construction tape. I was being introduced to the Yellow Dog River when its home was in a state of limbo – caught in one of the largest battles it has ever seen – and everywhere I turned I felt and heard the friction.

The road came to a sharp turn, where the trees opened and gave a glimpse of a sloping valley of trees and scrub below, and I laughed out loud in the car, out of awe. Just then a bulldozer emerged over a sandy ridge; its back wheels spun in the dirt and made it swerve from side to side. It looked like an alien creature as it crawled across my view, and was the last thing I saw before the caravan led me back into the woods.

At the site, with volunteers and gear unloaded, I put on waders for the first time to help collect insects. The Program Coordinator, Christy Budnick, demonstrated how to scrape the undercut banks and rocks with a large net and stir up life in the riverbed with a “river dance” to collect the insect larvae and nymphs that lived there. Feeling incredibly nervous and clumsy, I walked to the center of the river and tried to get used to the Yellow Dog’s cold current slowing down my legs. I heard birds and bugs, riffling water, and the chatter of intelligent people, young and old, discussing insects on the riverbank. I felt endlessly happy.

Over the course of the next two months, I met and got to know many of the individuals that breathe life into the entire Yellow Dog Watershed Preserve. I began to understand that the Yellow Dog has meant more to them throughout the years than just a beautiful landscape. I heard stories of: blueberry-picking, fishing, exploring, and camping. To my ears the “old” Yellow Dog Plains sounded like a raw and perfect Upper Peninsula wilderness. I heard in their voices a mixture of anger, sadness, and fear when they spoke of the changes being made by the road and the dangers caused by the mine. I found that these volunteers aren’t just adventure-seekers, but passionate people whose lives are very much intertwined with the Yellow Dog. They are people willing to battle mosquitoes for hours to collect macroinvertebrates, monitor rivers in the dead of winter, test water quality on Lake Independence from a kayak every week, rain or shine, and trawl the Plains before daybreak for a chance to see the rare Kirtland’s Warbler. They do all of this because it has to be done, and they do it knowing that every hour spent is helping to preserve a precious place.

Just as others may remember everything about their first time they met the Yellow Dog – the fresh sound of water over rocks, the call of an ovenbird from a thick clump of alder, or the sight of an intense blue sky over a field of blueberry bushes – I remember the rallies of people standing in water up to their chests, smiling through mosquito clouds and getting excited every time they see a dragonfly nymph squirm in the bottom of the insect bucket. These are the people who will always be part of my memory of my first summer in the Yellow Dog Watershed. I met the Yellow Dog when it was in a state of turmoil, but I also met more passionate, intelligent people since the summer of 2014 than I have during any other time of my life. So much good and knowledge gives us an incredible strength, especially when it’s combined with a love for one of the rawest and richest landscapes left in the northern country. Meeting these people makes me certain that even if the rain falls harder, our hands get colder, and the mining companies keep coming with their drills and leases, there will always be someone fighting for and celebrating our precious place. As a member of a “younger generation,”  I’m thanking every one of the workers and volunteers before me for allowing me to experience a Yellow Dog summer. Here’s to many, many more.